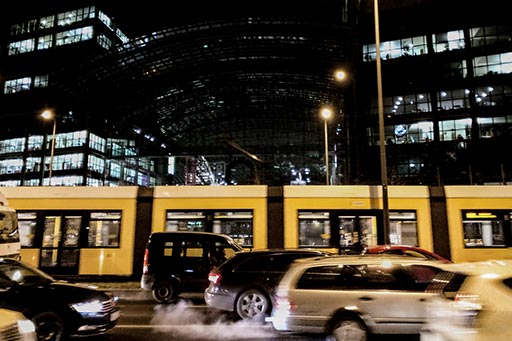 Air-pollution studies have shown that certain constituents in exhaust gases from automotive vehicles may react in the atmosphere to form smog-type pollutants. As a result, considerable effort has been made to determine the composition of these exhaust gases with particular emphasis on trace constituents, such as hydrocarbons and oxides of nitrogen.

Exhaust-gas obtained from Diesel, gasoline, and propane-powered motor coaches of similar passenger capacity under idling, accelerating, cruising, and decelerating driving conditions. These were analyzed for carbon monoxide, oxides of nitrogen, formaldehyde, and hydrocarbons. Studies have shown that, when the exhaust-gas flow rates were measured to permit calculation of the emission rate for each constituent at each driving condition, based on a typical city driving pattern, it was concluded that:

This concludes that there is considerable effect in the composition of motor coach exhaust gases on the part of manufacturers and operators. Their effect is caused by a desire to manufacture and operate equipment which contributes least to air pollution. Hence, depicting the vital role of the type of Diesel and other gases that are being used together with the automobile. In a nutshell, the type of automobile motor used in a specific vehicle should go hand in hand with the quality of the gasoline or diesel being offered by the gasoline station provider in order to achieve the least amount of air pollution.