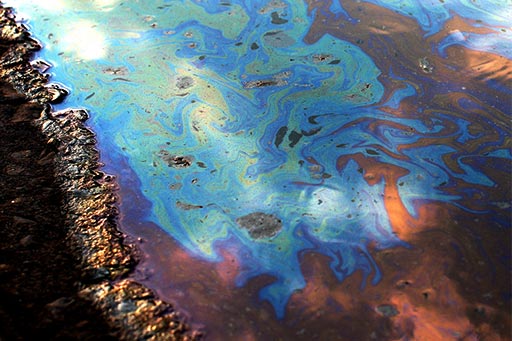 An oil spill is the release of a liquid petroleum hydrocarbon into the environment, especially marine areas, due to human activity, and is a form of pollution. The term is mostly used to describe marine oil spills, where oil is released into the ocean or coastal waters. Oil spills may be due to releases of crude oil from supply tankers, offshore crude oil drilling platforms, drilling rigs and wells, as well as spills of refined petroleum products (such as petrol, diesel) and their by-products, heavier fuels used by large ship, etc. Oil wastes enters the ocean come from many sources, some being accidental spills or leaks, and some being the results of chronic and careless habits in the use of oil and oil products. Most waste oil in the ocean consists of oily storm water drainage from cities and farms, untreated waste disposal from factories and industrial facilities, and unregulated recreational boating.

Oil waste poisons the sensitive marine and coastal organic substrate, interrupting the food chain on which fish and sea creatures depend, and on which their reproductive success is based. Wildlife other than fish and sea creatures, including mammals, reptiles, amphibians, and birds that live in or near the ocean, are also poisoned by oil waste. The hazards for wildlife include toxic effects of exposure or ingestion, injuries such as smothering and deterioration of thermal insulation, and damage to their reproductive systems and behaviors. Long-term ecological effects that contaminate or destroy the marine organic substrate and thereby interrupt the food chain are also harmful to the wildlife, so species populations may change or disappear.

Today we are exploring, extracting and consuming more oil than ever before. With this high demand, the incidences of oil spills is bound to increase. In spite of various safety measures, it is important to contribute to the various safety measures in preventing oil spill. As a gasoline station owner, it is important to keep track of your used oil filters in order to keep your gasoline station well-rounded and in compliance with the standards.